Kinesio tape has been getting a big write up in the press recently, especially after it was spotted on many athletes at the 2008 and 2012 Summer Olympics. So what is this brightly coloured tape and why are so many athletes wearing it? 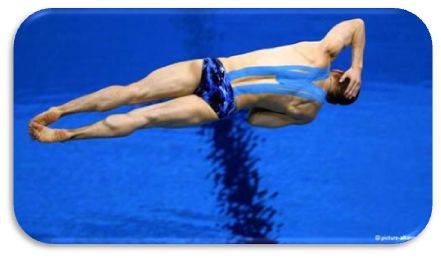 For starters it’s not a new thing. Kinesio tape was developed by Japanese chiropractor and acupuncturist, Dr Kenzo Kase, in the 1970’s, in response to the limitations he found working with rigid tape. It is designed to facilitate the body’s natural healing process, preventing sports injury while allowing support and stability to muscles and joints without restricting the body’s range of motion, like rigid tape does. Practitioners in Japan have been using it long before it became more main-stream worldwide after rolls of the tape were donated at the 2008 Beijing Olympics. According to Kenzo Kase, the creator of Kinesio tape, the proposed mechanisms may include:

I myself did not start using kinesio tape until this year. I was working at a military base in the UK, and worked with 2 other physios who had trained in using it. I instantly liked it and noticed improvements in my patient’s movement patterns and decreased pain on movements that were previously painful. The theory behind it fit with the some of the theories that I already applied to many of my treatments. I did a training course in it myself not long afterwards to further learn the different techniques.

As the tape can stretch and recoil, by applying it to the skin we can alter the lift and pull of the skin. The idea is that by lifting the skin you can take pressure off the injured injury and increase blood flow and lymphatic drainage. What I’ve also noticed the most is that it can offload muscles and soft tissue, in much the same way as massage or myofascial release does.

Look at the picture below. 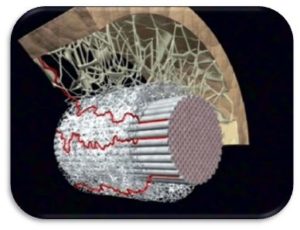 The top layer is skin and the round section in the middle is muscle. The web like structure connecting the skin to the muscle is called fascia, and we have it everywhere in our bodies. It covers muscle, bones and organs, and interconnects everything under our skin. 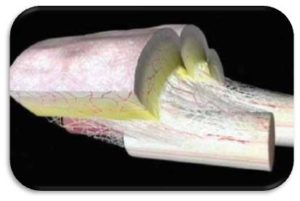 If you imagine your hand on top of your skin gliding the skin in one direction, you’ll also be moving the underlying facia, as shown in the picture above. You can see then that it will consequently have a pulling effect on the underlying muscle.

I’ve had patients who could only rotate their head 50% of normal motion one way. After applying the tape, they had full range of motion. I’ve applied the lymphatic drainage techniques on bruises, and the following day seen a significant reduction in bruising and swelling in the area the tape was applied, as you can see below. 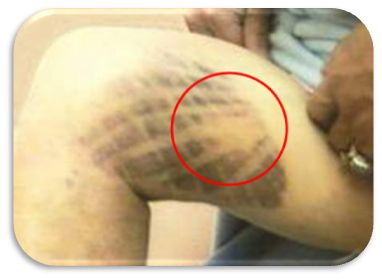 This traumatic injury to the upper thigh was Kinesio Taped to encourage lymph to drain to the inguinal nodes at the groin. After the tape was removed 12 hours after application, the channels formed by the tape are clearly visible, as well as the dramatic reduction in bruising.

I’ve seen that it can aid in improving muscle activation by repositioning the muscle and surrounding soft tissue and therefore over time muscle strengthening may occur. The biggest thing it seems to do is facilitate pain free and improved movement patterns, and this is what you will see most athletes wearing it for. Rather than immobilising a joint, like rigid tape does, it encourages normal or freer movement.

So it’s not just there as a fashion accessory, it does actually help. There is still a lot more research to go in this area, but thousands of Olympic and professional athletes can’t be wrong!

The Strategic Approach to Preventing and Managing Work Related Injuries, Sickness and Absenteeism.

Empowering your Business with the Expert Knowledge of Modern Day Devices and Ergonomic Solutions.